Tram crews enjoy a cup of tea or coffee prior to their duties. The upstairs cafe now has really attractive table settings.
A view of J'burg 60 and Blackpool & Fleetwood 2 from the cafe window.
We walk round the corner and the inevitable white vans completely spoil the effect and the hard work that has gone into creating a period urban backdrop for visitors to photograph the trams. If tram crews are discouraged from using out of context mobile phones etc, why oh why are vans allowed to park willy nilly? The van on the left was parked most of the day, the one on the right had a driver with an attitude problem. 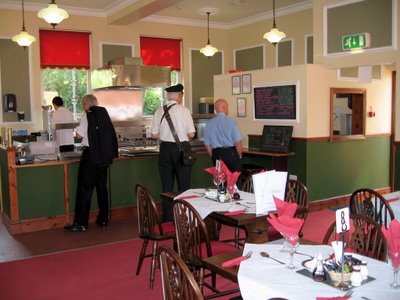 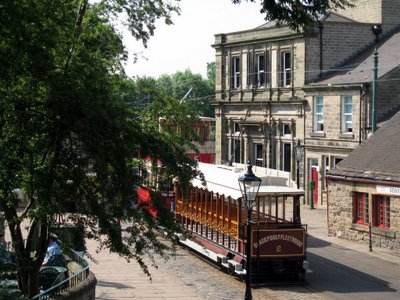 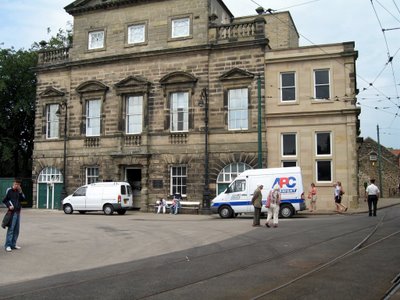 Posted by Richard Lomas at 19:06 No comments: 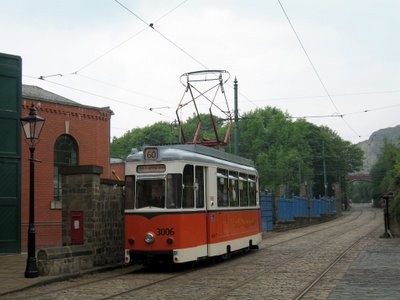 Another overcast day with Sheffield 74 and LCC 106 in service.
Berlin is seen 3006 operating 'wrong line' on its way from the depot to Town End.
London United 159 has received another coat of paint on its dash panel. 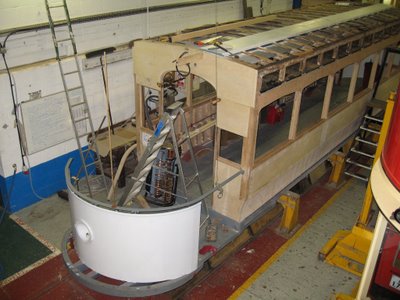 Posted by Richard Lomas at 18:05 No comments: 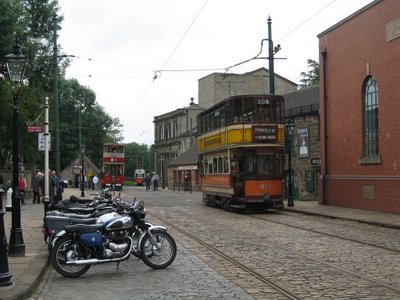 Today was overcast but fine and Chesterfield 7, Johannesburgh 60 and Glasgow 812 were in service.
812 is seen passing a collection of vintage motorcycles whilst inside the library a training course was taking place. 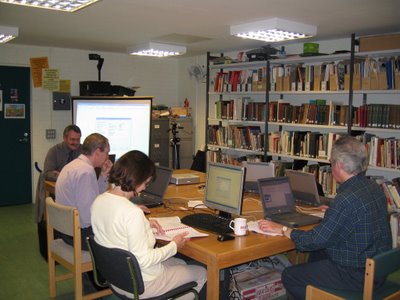 Posted by Richard Lomas at 20:13 No comments:

Not much too say today. Weather windy but managed to stay fine 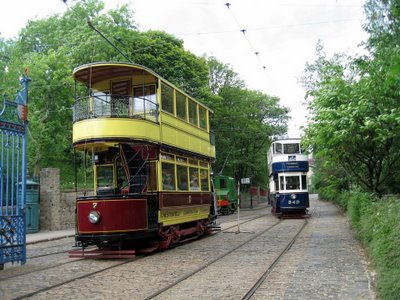 . Chesterfield 7 and Leeds 345 were in service with Liverpool 869 and Glasgow1297 on driver training duties. Track work continued with single track working as last week. Here is southbound 345 crossing over in front of north bound 7.

Posted by Richard Lomas at 17:18 No comments: 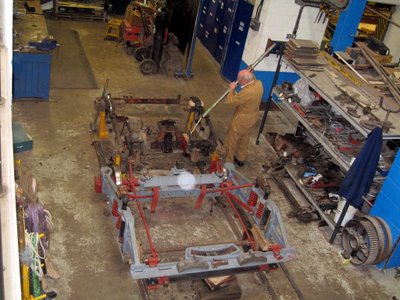 Ken Green dismantling a narrow guage Lison bogie which will be reconstructed to standard guage as has the one in the foreground.
A controller has been fitted to the south end platform. I have no idea why the number 171 is chalked on the dash panel but Dave Jones has sent me the explanation.
'I was at a postcard fair in London when I found a superb close up of the front end of LUT171. It was a view I had never seen before so I bought it and had it copied for the workshop to assist them with detail etc. It was from that view that much has been laid out, including the headlamp position, once a number had been chalked on the dash.' 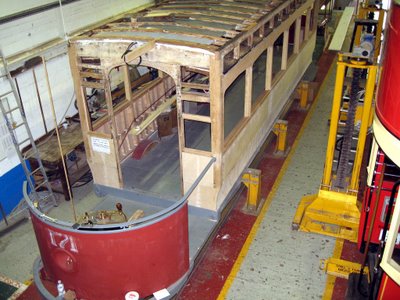 Posted by Richard Lomas at 19:46 No comments:

The weather today was rather muggy and Glasgow 22 and Southampton 45 were in service. Berlin 3006, the Access Tram, is used most weekdays and today was no exception 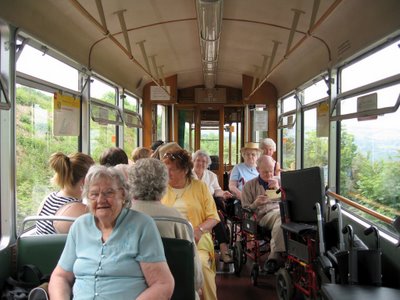 . I think the lady nearest the camera of picture 1 had worked on trams or buses many years ago but I forgot to ask where. Picture 2 show a grandfather from Burton on Trent and his grandson enjoying an ice cream on the steps of 22. 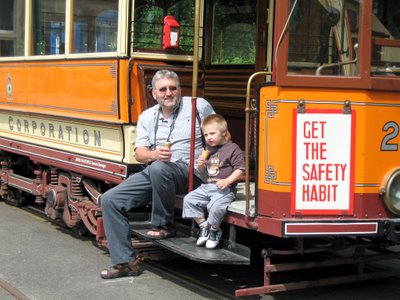 Posted by Richard Lomas at 18:44 No comments:

It was an overcast and miserable day today and, rather surprisingly, Blackpool & Fleetwood 2 and Johannesburg 60 were in service. A contractor was also working on the track as shown in picture 1 resulting in 'wrong line' running for south bound cars between Cliffside and the Depot Approach (pictures 2-4) 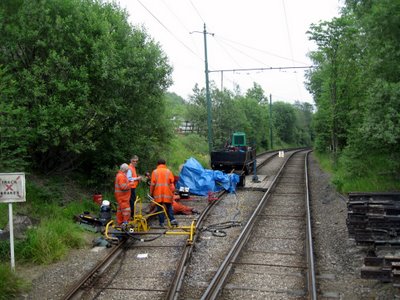 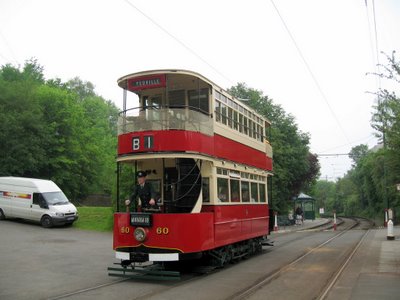 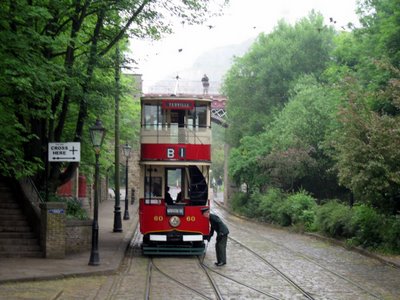 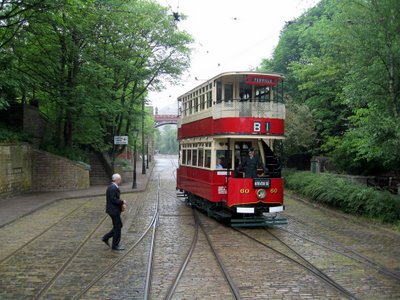 Posted by Richard Lomas at 17:30 No comments: 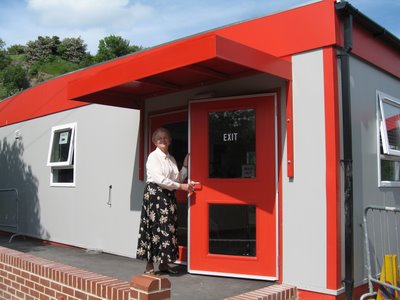 Today was Tramathon day at the Museum with lots of sunshine and lots of trams to photograph. It was also the day on which a long serving member of staff, Doreen Worth, opened the new entrance kiosk.
Kath and I visited the Museum during the afternoon - Kath met an old friend, John Henderson and his dogs, and I had a beer in the Red Lion. 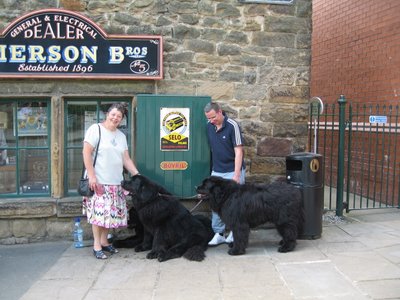 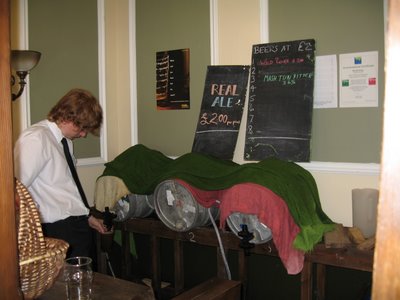 Posted by Richard Lomas at 21:39 No comments: 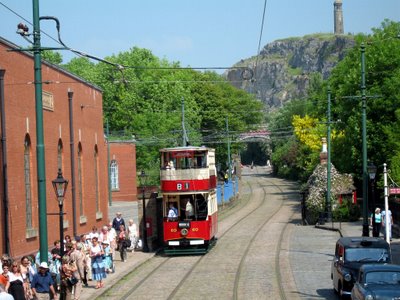 Yesterday was a beautiful day at Crich which marked Johannesburg 60's return to traffic alongside Southampton 45. The second picture show the Derbyshire countryside seen from the top of a tram. 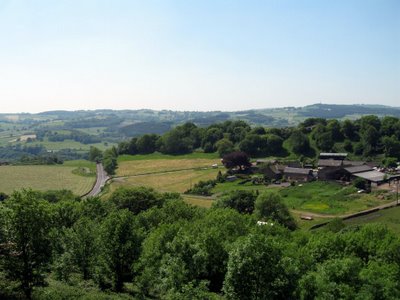 Posted by Richard Lomas at 07:46 No comments: 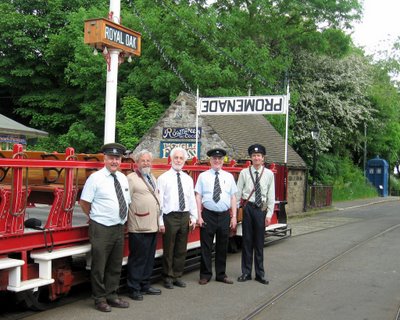 Today the tram crews observed a minutes silence to coincide with the funeral of Denis Higgins, one of the pioneer tram drivers at Crich (from left - Mike Crabtree, Richard Lomas, Derek Lambelle, Roger Webster, Keith Twist). See Historical Archive for pictures of Denis in action.

Posted by Richard Lomas at 18:51 No comments: