all around my hat

Roger Webster took this photograph of Frank Bagshaw's hat at the Crich50 celebrations. 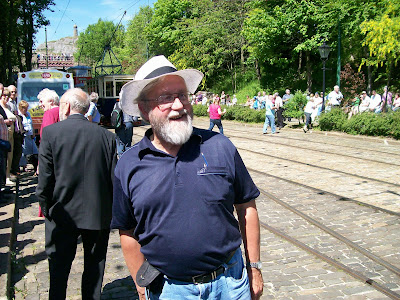 We are going on Ian Longworth's tour of Ukranian tramways tomorrow so there will be no more Crich pictures until early July. I hope to publish some pictures of the world's longest trolleybus route and lots of trams including Tatra T3s (click on link). 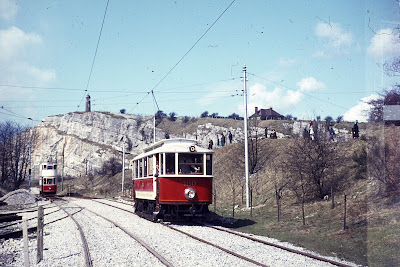 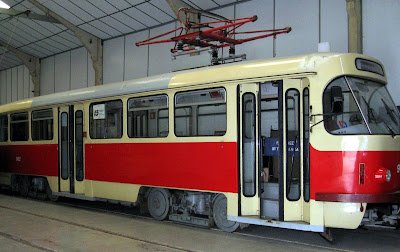 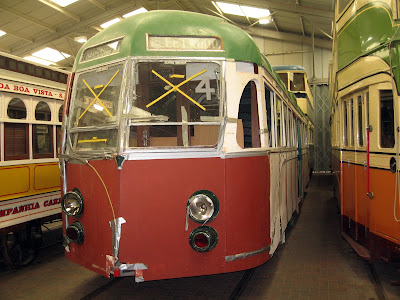 3 & 4. Recent pictures of Blackpool 298.
Halle 902 and Blackpool 298 have been the subject of recent comments on the internet so I thought I would add my suggestions.
Blackpool 298 should not be stored in the Exhibition Hall but consigned to a dark corner at the back of the depots for the next 5 years. During this time the Blackpool Tramway will be transformed and a rational policy for all the Museum's Blackpool exhibits can then be determined.
Halle 902 is unlikely to be an Access Tram. However it could be retained as a static exhibit and combined with Prague 180 to form the centrepiece of a dispay of Eastern European tramways. Some 17,622 Tatra T3/T4s were built, more than any other type of tram and whilst 902 is not suitable for running at Crich now, who knows what the situation will be in another 40 years. 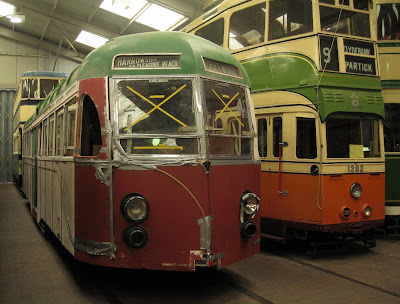 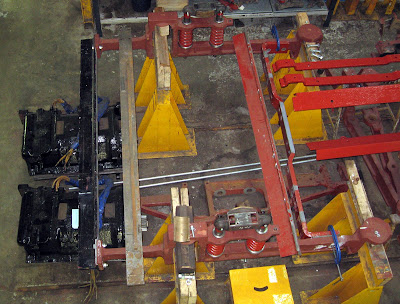 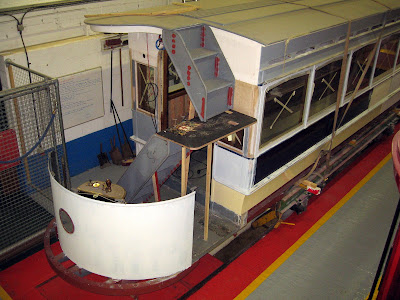 2. The south end staircases have been placed in position.

Posted by Richard Lomas at 10:04 No comments: 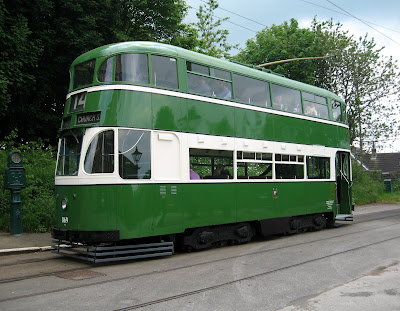 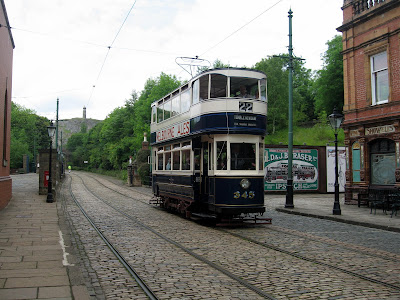 Posted by Richard Lomas at 17:07 No comments:

Path to Glory Mine

Today I walked along the public footpath to Glory Mine and back. The overhead line at GM has been modified so that it is now necessary to operate a pull frog to use the trolley reverser. 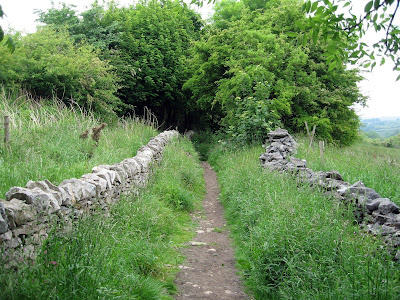 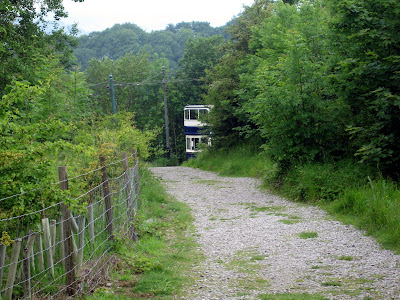 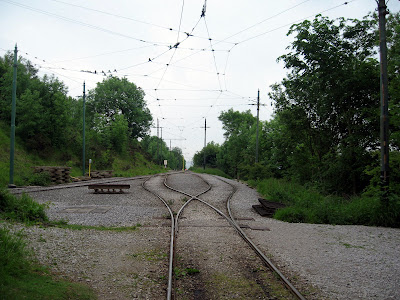 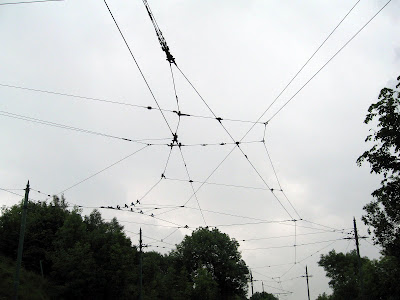 Posted by Richard Lomas at 15:41 No comments:

The top picture was given to Mike Crabtree by John Peck (a 1960 veteran) at the Crich50 celebrations. 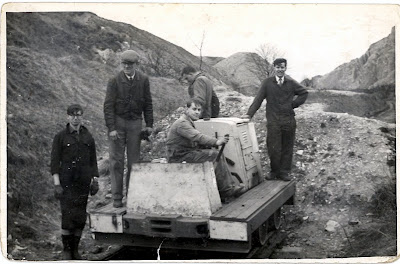 "Sorry not to have sent it sooner but I have been trying to date the photo.
The loco was delivered to Crich on 22nd August 1963, so the photo must be after that date but it is before the overhead anchor pole was put up beyond the pile of ballast that marked the end of the track.
Also the loco has been fitted with running boards over the wheels and this did not take place until late 1963. As there are no leaves on the trees in the background I suggest that the photo is taken in about March 1964 or thereabouts.
The location to most of today's TMS members may be a little difficult to appreciate but the area beyond the pile of ballast is now occupied by the Bandstand Stop (northbound) and Ashton Shelter. The loco is just beyond on what today is the northern end of the interlacing
Names: L to R on the ground Jim Jordan, on the loco Merlyn Bacon, Roger Benton standing to the rear, Tony Bacon driving and Mike Crabtree standing on the right on the running plate. Note how smart we are with collar and tie on with overalls, a sign of the times!" 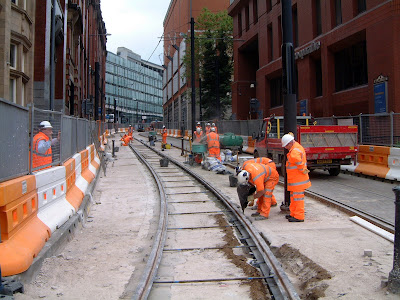 Nigel Walker sent me this picture of new track being grouted at Shudehill Manchester on Wednesday.
All the 'lads' in the top picture were volunteers as the early TMS couldn't afford to employ anyone.
All the 'lads' the second picture will be employees of contractors or subcontractors.
The problem facing today's TMS is how to combine the talents of volunteers and employees, contractors and subcontractors and to create stable working relationships. At the moment the balance is tilted too heavily in favour of employees who are protected by legal rights which are not available to volunteers. When faced by conflicts of interest, managers at the Museum often take the course of least resistance and simply dump the volunteers who are then quietly replaced by more employees or contractors.
Perhaps each manager should have increasing the number of volunteer hours in their department by 10% year on year as one of their formal key tasks.

Posted by Richard Lomas at 11:46 No comments: 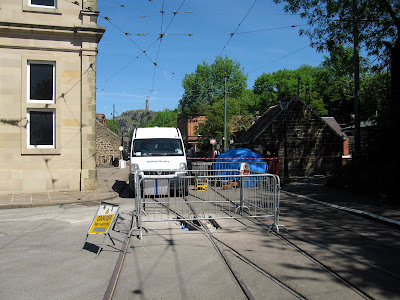 1. Remedial work on the track at Town End. 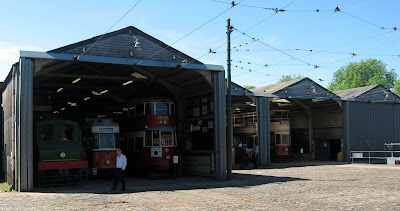 2. The tram service was delayed by a problem at Wakebridge sub-station.

Posted by Richard Lomas at 15:59 No comments: