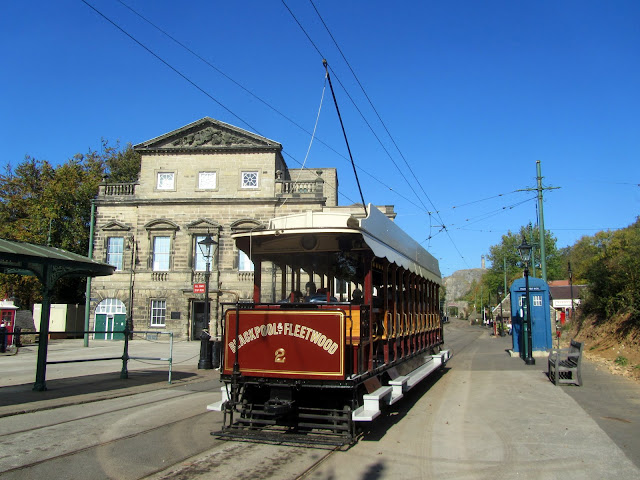 On Saturday London United 159 was mounted on its bogies. These pictures were taken on Wednesday morning when the controllers were being fitted. 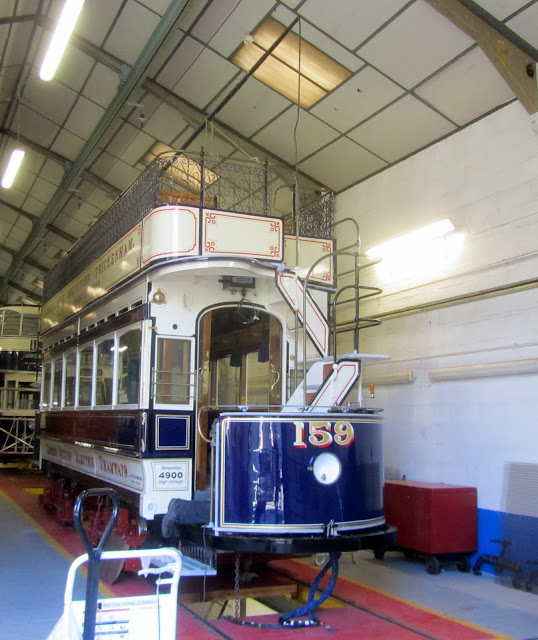 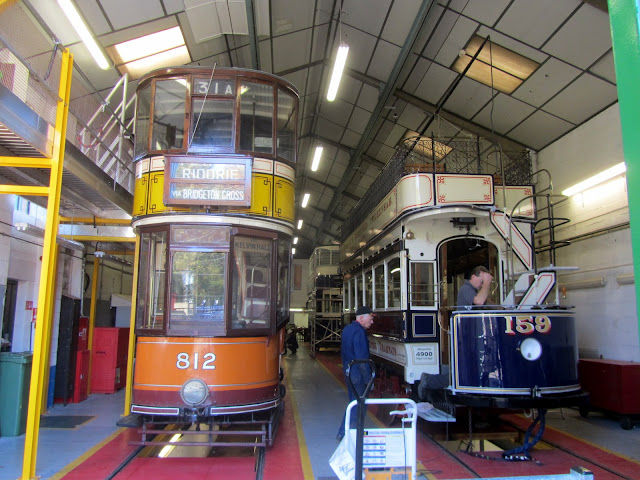 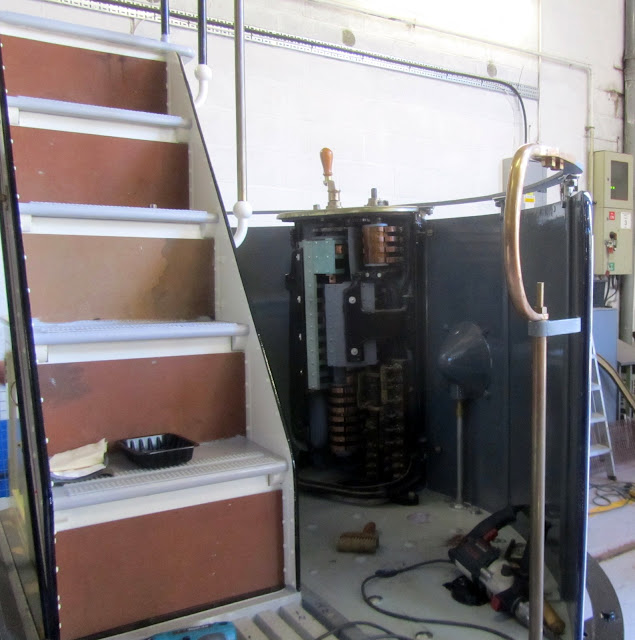 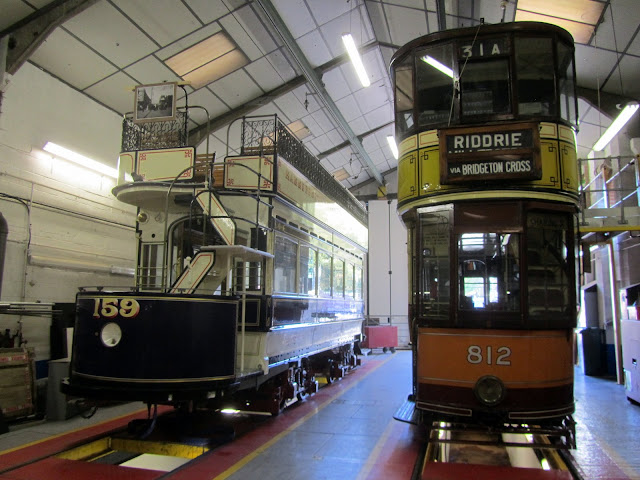 Wine to Champagne; a tramway odyssey

was the title of a 10 day coach tour from 16th to 25th September. Friday was taken up with journey from Manchester to Den Haag in the Netherlands. The picture shows our coach at Dover waiting to board the 12:40 sailing of the new P&O ferry, Spirit of Britain. 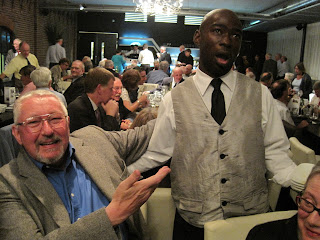 Saturday and Sunday were free days in Den Haag timed to coincide the AGM of the LRTA and celebrations to mark the 50th anniversary of the closure of the interurban tramways between Den Haag and Leiden. It had been hoped to operate three former interurban cars on service 10 to Voorburg but was not possible and three PCCs and an NZH motor and trailer set from the former Leiden town service was substituted. The LRTA annual dinner took place at the museum premises on Saturday evening. On Sunday morning there was a tour using two coupled PCCs and then on Sunday afternoon we travelled on a few service trams.

The Netherlands now has a nationwide smart card ticketing system which is fine for locals but difficult for visitors. Smart cards cost a minimum of 21 Euros if purchased at a railway station but we were told that cheaper smart cards and paper day tickets were available at the HTM office. The problem was that it was closed on Saturday morning and we were then advised to go to the Tourist Information Office, some distance away and ironically nearer our hotel, where we were able to buy paper days tickets covering the central zone and adjacent zones but not including the outer termini of longer routes. At 6.80 Euros these seemed expensive and as the ticket cancellers have been removed from the trams they have to be stamped by the drivers. 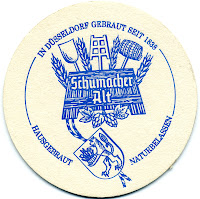 The long coach journey to Strasbourg began at 08:00 sharp and after some some traffic delays we were on our way to Duesseldorf for a lunch break. Duesseldorf has in effect two tram networks: low floor cars operating surface routes and high floor stadtbahn cars on services which are underground in the city centre. There are also major construction works which suggest that more routes will be buried. We were lucky and found a brew pub in a side street. It was established in 1835 and is typically German selling just two beers: alt and hell. The coach then continued to Mainz for another short break near a suburban terminus for a few more pictures.

The next two days were free in Strasbourg with suggested outings to Karlsruhe or Friburg over the border in Germany but we stayed in Strasbourg which is a very pleasant city with an excellent tram service. Day tickets costing 4 Euros can be bought from machines at all tram stops and they are also valid on a cross border bus to Kehl in Germany. There are also validators which stamp the date and time on tickets at each stop. 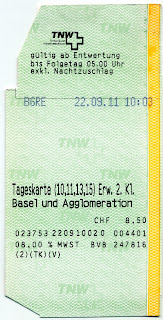 It is less than two hours drive to the Swiss frontier at Basel and the coach deposited us on the French side of the border from where it was a few minutes walk to the terminus of tram route 3. Day tickets for 8.50 Swiss Francs could be bought from a Kiosk or a machine which would also accept Euros. There were no border checks at all with the control posts completely unmanned. Switzerland seemed very expensive with present high value of the Franc. In the early evening we walked back into France, spent our last Francs on a beer and drove to Mulhouse.

Friday was a free day in Mulhouse where day tickets for the urban system cost 4 Euros and were available from machines at stops which didn't accept notes so I tried a debit card which to my surprise was accepted. Goodness only knows what the bank charges will be for an 8 Euro transaction. Tickets for the tram train are based on zones A thru D. 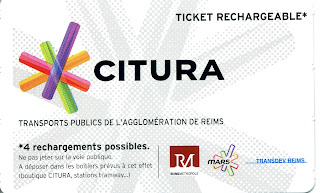 Saturday morning was taken up with the drive to Reims where we were dropped at the suburban TGV station. There were some misgivings about the smart card based ticketing system but it proved to be very easy. The vending machines at the stops simply charged an extra 30 cents if you hadn't got a blank card. I couldn't persuade the machine to issue 4 Euro days tickets but it did sell a group day ticket for 5 Euros which even at 5.30 Euros was a bargain as it was valid for up to 5 people.
Sunday was taken up by the journey home with a 7:30 start but we arrived in Birmingham before 17:00 despite some delays on the M25. A similar trip to new French tramways is being considered for next autumn.
Posted by Richard Lomas at 08:34 1 comment: 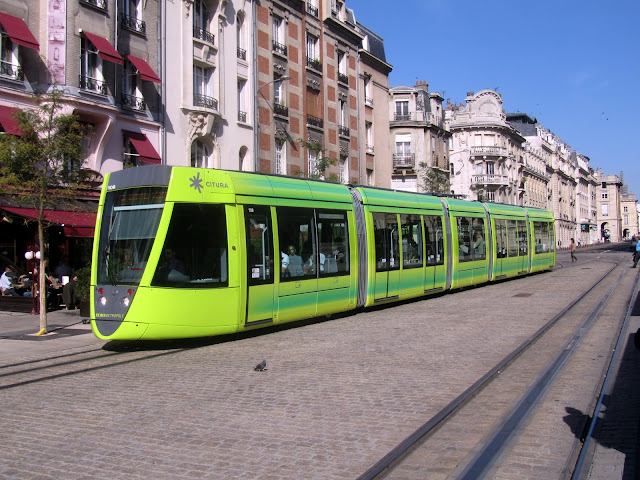 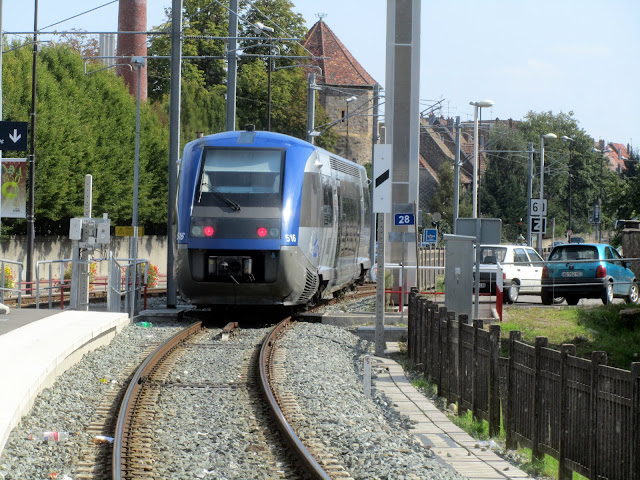 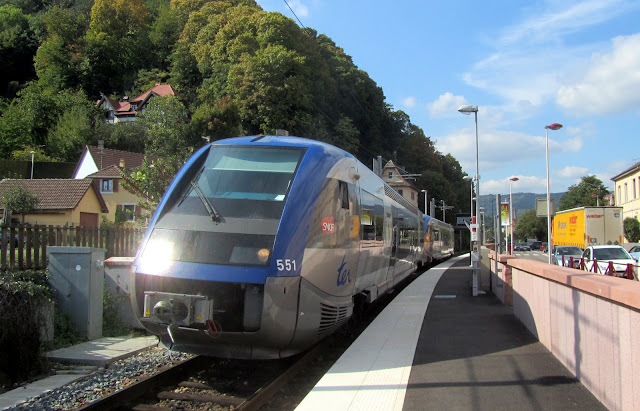 Posted by Richard Lomas at 14:50 No comments: 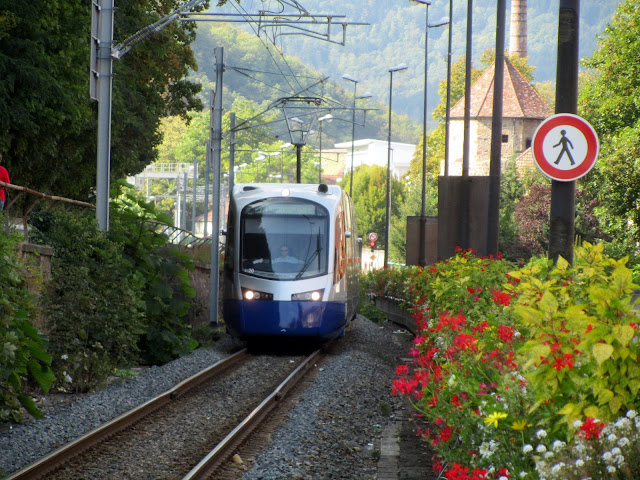 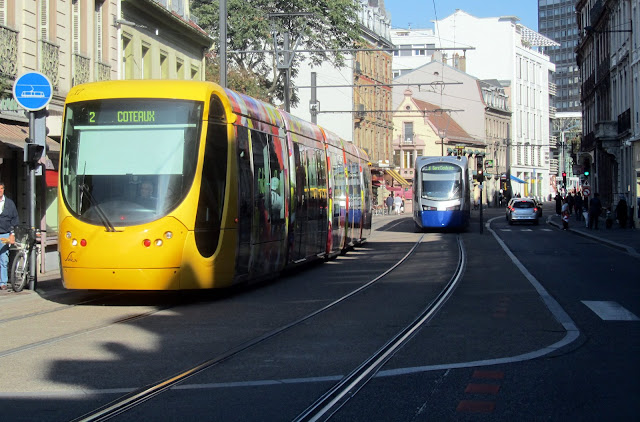 Posted by Richard Lomas at 14:14 No comments: 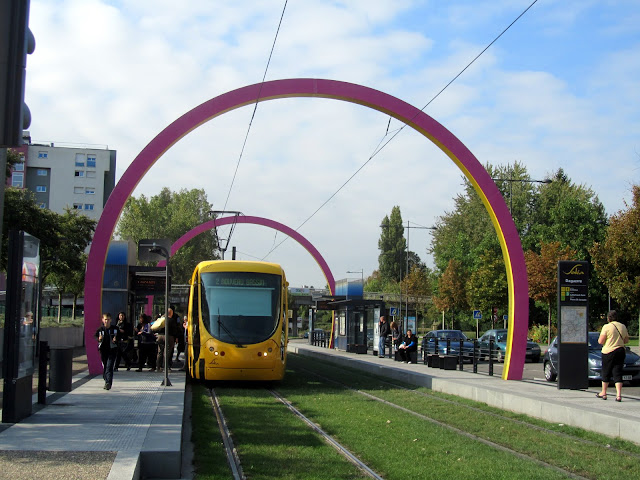 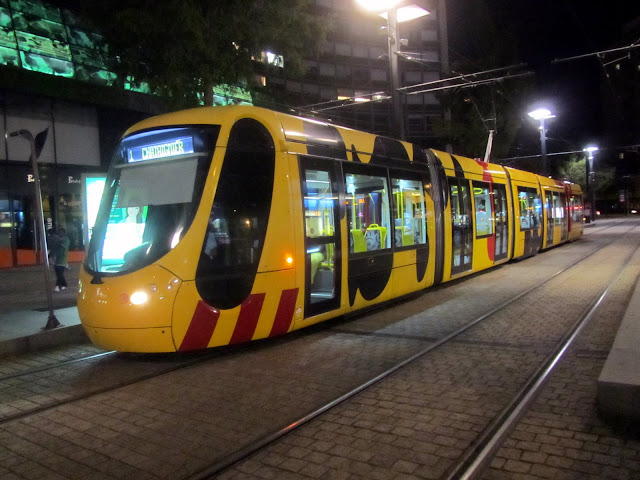 Posted by Richard Lomas at 13:51 No comments:

Through the looking glass 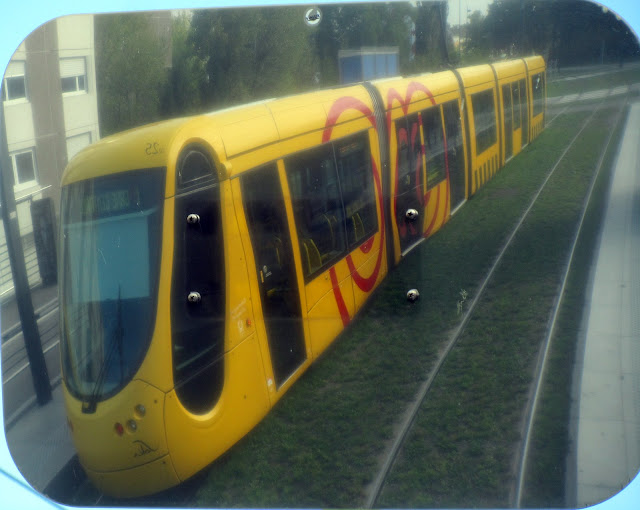 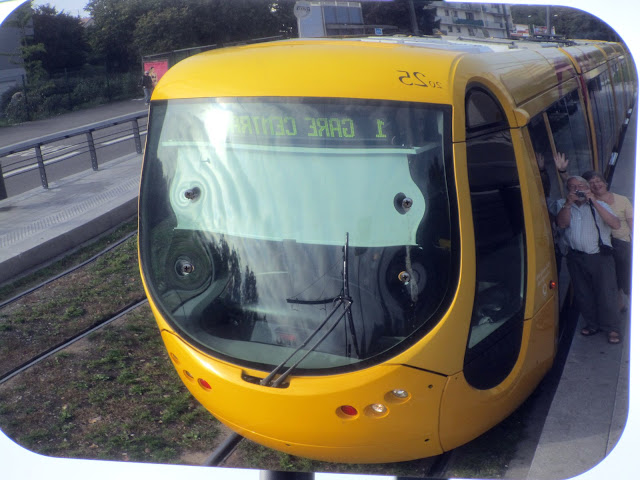 Posted by Richard Lomas at 05:53 No comments: 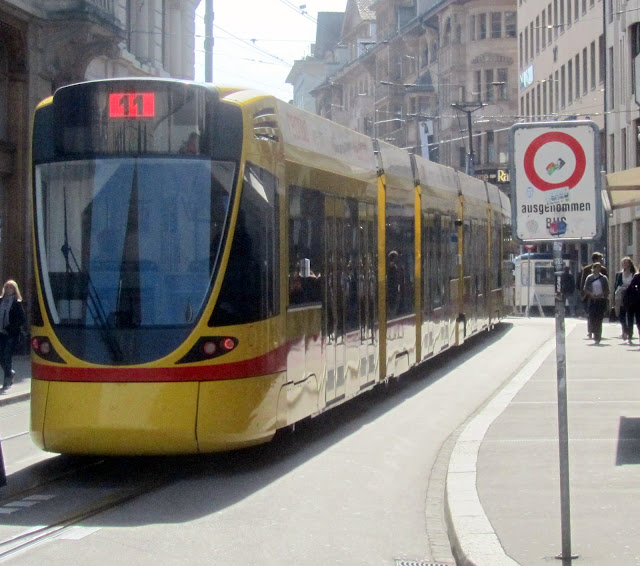 Posted by Richard Lomas at 16:55 No comments: