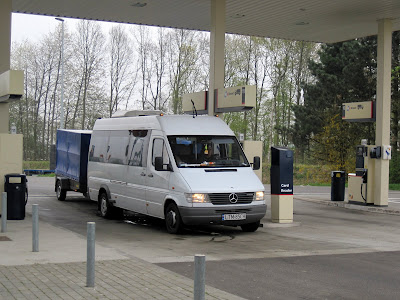 During the night the minbus continued to drive accross Germany stopping only for pee breaks and driver changes. We passed Dresden, Leipzig and Halle. The roads started to get busier as we passed Dortmund at 5:50 and Koln at 6:15 before stopping at a service area near Achen at 7:00 for a forty minute breakfast. We crossed into Belgium at 08:00 and passed Mons at 10:00. The picture is at a fuel stop just before crossing into France. 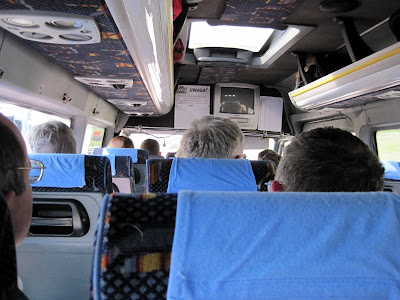 The minibus had been booked to go to Caen for a Brittany Ferry to Portsmouth but following various phone calls we found out the the only available sailing was at 23:45 from Cherbourg. 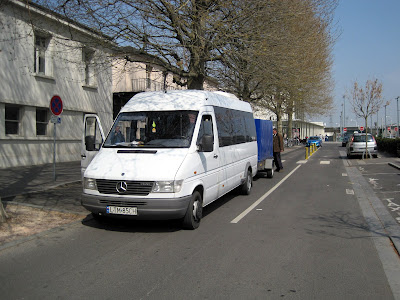 We drove on through France passing Amiens at 12:25 and Rouen at 13:20 and finally arrived in Caen at 15:20. The minibus completed its journey outside the station where the next train was at 16:59. This allowed time for something to eat for a picture of the guided trolleybuses. 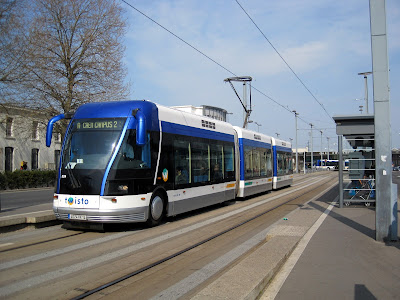 We arrived in Cherbourg at 18:10 and walked the 2 km or so to the ferry terminal where we had a glass of red wine which was cheaper than beer. The arrangements had worked and after inspecting our passports, we were given boarding cards. These were checked twice before we finally boarded the Cap Finistere which only entered service with Britany Ferries in March. We tried to sleep in a corner of the bar but then at 1:00 Kath went for a pee and came back with a cancellation on a cabin.  On arrival in Portsmouth we had to get to LHR to collect the car. National Express operate a coach service but not a ticket office and the phone lines were busy. The next option was a taxi to the station and then a train but the taxi driver made us a tempting offer to drive us to the car park. Kath is convinced that there was volcanic dust on the car but it started first go and we drove home to Waingroves.