The Tallinn tramways have changed remarkably little since our last visit in June 1990. The route network is the same with two cross town routes and four services (2 to each terminus). The Tatra T4 bogie cars have been replaced to by second hand KT4D artics from east Germany giving a very standardised fleet. The condition of the track has improved but neither the tramway nor the trams have been completely reconstructed as has been the case in eastern Germany. The tram service is both frequent and reliable. I think there are 12 cars with low floor sections and low floor journeys are identified in the timetables.
The big difference is the price of a tram ride. In 1990 the old Soviet fare of either 3 or 5 kopecks still applied and the official rate of exchange was 10 Roubles = £1. So the tram fare was either £0.005 or £0.003. Now Estonia is in Euroland and the basic tram fare is 96 Euro cents. The rate of exchange at East Midlands Airport was 1:1, so the fare has risen from £0.005 to £0.96. A day ticket costs 4.47 Euros which is more than in many British cities. Surprising the old ‘Komposters’ that cancel a ticket by punching a pattern of holes are still in use for single ride tickets. 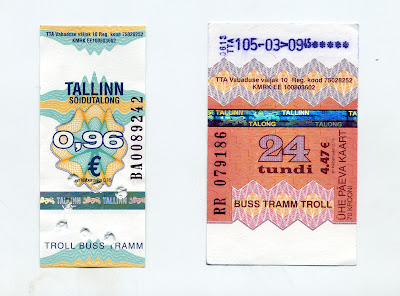