Wim Beukenkamp has sent me these two pictures.
"Accompanied some pictures of two Amsterdam Unions (nickname of first generation Amsterdam trams of which they had 215, all built in 1903 and 1904, named after the supplier of the electrical equipment, the Union Electricitats Gesellschaft UEG).
144 is the original Union from 1904, as withdrawn in 1950 and subsequently preserved in the Railway Museum.
It has now been restored to operational condition by members from the museum line in Amsterdam.
72 was delivered in 1903 and ran until 1950 and subsequently sold for private purposes.
72 was found as a shed near Haarlem in 1985.
It has been reconstructed by members from the Dutch TMS as Amsterdam 72 in its earliest condition.
It can also run as HTM 2.
When HTM started its electric operation in 1904 they were desperate for trams.
Amsterdam was willing to transfer a running order for Unions to HTM, resulting in HTM 1-10 originally ordered by Amsterdam ending up in The Hague.
Both trams can be seen on the museum line in Amsterdam." 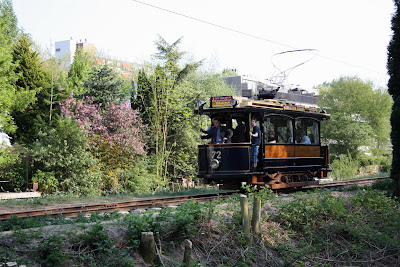 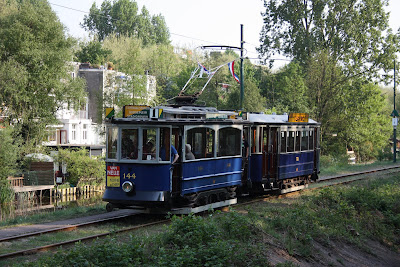