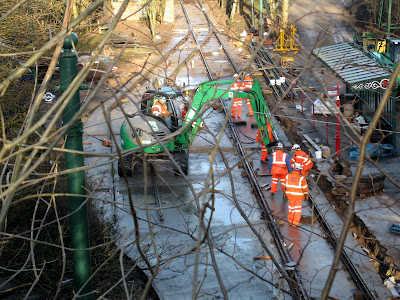 1. General view of the work site.
2. Looking northwards with a bolted rail joint between the point casting and the rail. 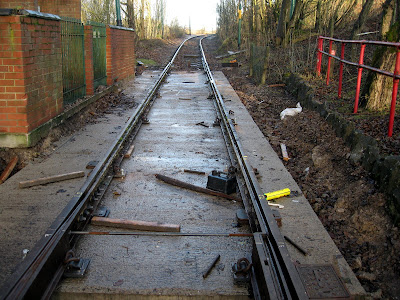 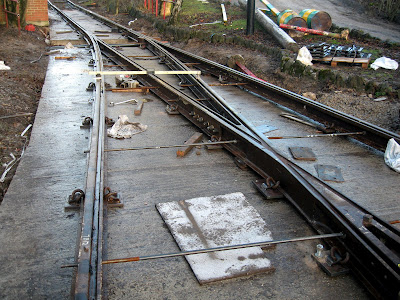 3. The construction method can clearly be seen on this picture of the north end points. 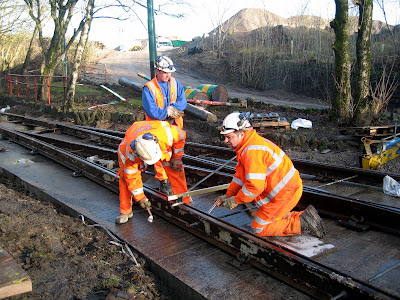 4. Apart from the modern work wear this picture could have been taken years ago.
In reply to BB's comment, I suspect that the size of the task was not realised when the track repairs at Town End were done a few years ago. Now that we are about to celebrate 50 years of Crich we have to accept that most of the infrastructure will have to replaced/upgraded over the next 50 years.
In the Historical Archive I have published a picture of some the first track we laid using worn out light-weight quarry rail on any old wooden sleepers. Over the years this was continually improved and upgraded to using the best available second-hand tram rail on concrete sleepers which were very very heavy to handle. Similarly the alignment was improved through the quarry so that the track was nearly straight and level rather than gently undulating. Over the years all the quarry rail in the depots was replaced with tram rail and the floors concreted.
Yes it would have been better with hindsight if Town End had be relaid to a higher standard but I expect Wakebridge to be the first stage of track improvements. We will also have to look at the overhead line which is beginning to show signs of weathering and an even bigger task will be to improve the standard of the depots - they simply are not well enough insulated for the cold wet Derbyshire winters.
My request is that things are not simply replaced when they become time expired but that they are improved otherwise there won't be an NTM at Crich in another 50 years time.