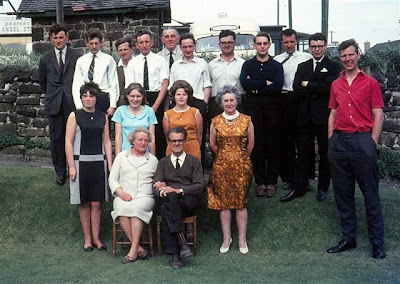 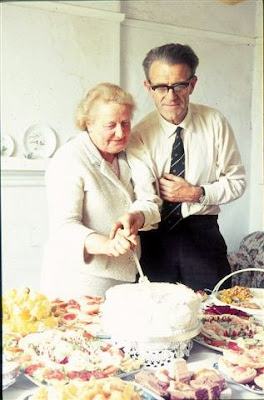 The people in the picture have largely been identified but some were wrongly identified or missed out, I think this is the definitive list.

L to R back row: Mike Davis, Charles Haycock, Bob Hall, Alan Williams, Richard Fairburn, John Baggs, Bob Carter, Tony Bacon, Roger Benton, Ian Stewart, Eric Cooper.
L to R, middle row: Sheila Jones (later Mrs Sheila Crabtree), Christine Haycock, Norma Salt (later Mrs Bob Hall), Mrs Gladys Poplar.
L to R, front row: Faith Bacon, Merlyn Bacon.
I also add a picture of Merlyn and Faith cutting their Silver Wedding cake on the same occasion.
Further comments; I can't remember if Bob and Norma were married by that date so will ask Bob next time I see him, but I think Charles and Christine Haycock had married by that date.
I am pretty sure it is Alan Williams (4th from the left) in the back row, at that time he was a Petty Officer in the Royal Navy and whilst serving in the Far East was able to research the history of Hongkong tramways prior to producing a book that he co wrote with Peter Atkinson. The book was published by the LRTL in 1970 and has since become a standard work on the Hongkong Tramways.
The Hartwells who were mentioned and wrongly identified by others were not present and therefore not on the picture
Finally the unidentified so called teenager on the right of the image you have used, is myself, but by that date I was well passed my teenage years and heading in to my mid twenties!
Enjoy and happy for you to publish.
Best rgds
Mike Crbatree