Work has started on the Town End track reconstruction project. 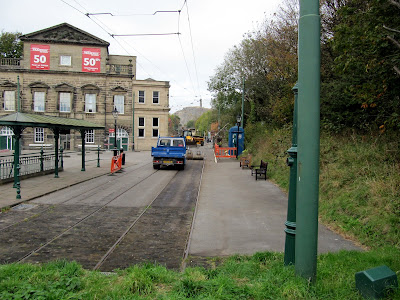 1. The construction site has been fenced off and a JCB machine and a large dump truck have arrived. 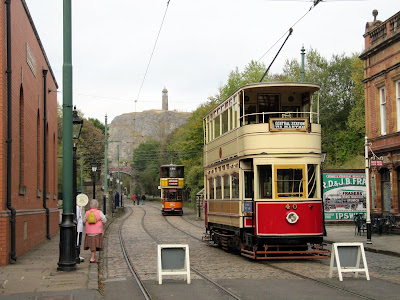 2. The trams are terminating outside the Red Lion. 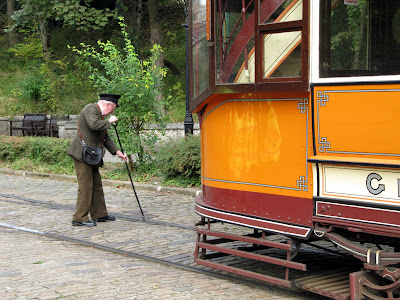 3. Glasgow 812's conductor changing the points for the car to cross over to the left hand track.

When the Tramway Museum Society acquired a lease for the museum site in 1959, one of the first jobs was to tidy up the site which had simply been abandoned when the quarry closed two years earlier. The mineral railway cutting from what is now the Print Shop to the main road was the obvious place to dump things. This had the beneficial effect of increasing the area of reasonably flat land. Town End crossover came from Beauchief in Sheffield and was laid on this land by volunteers in 1961/62 on a mixture of wood and concrete sleepers. The design and layout of the track was dictated by the materials to hand. Electric trams first used the left hand track in June 1964 and in 1965 the crossover was brought into regular use with the doubling of the track.

It is a credit to the pioneers that this track which was used far more intensively than anyone could have imagined remained in use for forty years. In 2005 the foundations and the sleepers were replaced in what was recognised would only be a temporary repair. This work is described in Journal 190 on page 55 and Journal 192 on page 137.