It is exactly 50 years since Sheffield tramways closed with a formal procession of trams on a wet Saturday evening, 8th October 1960. Trams had operated the scheduled service from Vulcan Road to Millhouses and Beauchief until the late afternoon when they were replaced by a temporary bus service. 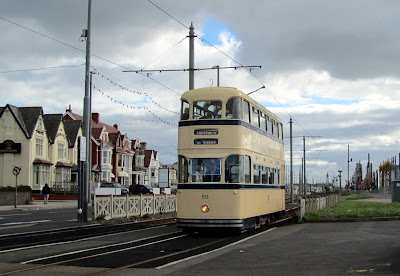 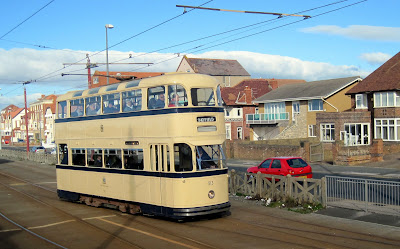 These two pictures of 513 were taken at Bispham on 24th September 2010. It is only very rarely used in Blackpool and when I rode on it the next day the conductor claimed it hadn't been used for five years. It has had a few modifications since leaving Sheffield and seems to have lost its track brakes.
Sadly 510 at Crich which was the official last tram and is largely intact is not currently serviceable. It requires some mechanical work and whilst it has been stored the paintwork has deteriorated badly in the damp depots.
The other tram at Crich which took part in the procession is 189 which last operated in 1980 and has been stored pending restoration ever since. Single decker 46 operated at Crich until 1973 and is now in store at Clay Cross and the illuminated car 349 became generator car 01 which was broken up but its truck was used for Chesterfield 7. Finally 264 ran in service on the last day but was not part of the procession. Like 189 it has not been used since 1980 but it is stored in the exhibition hall.
Sheffield Supertram have also marked the occassion by repainting one of their trams. http://www.supertram.com/latestfromsupertram_7972.html