News from The Hague. 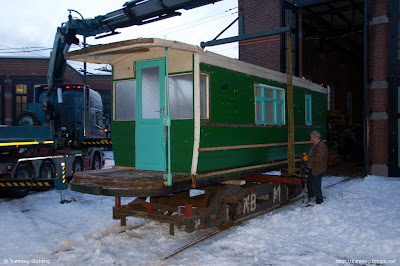 On December 17 2010, former HTM toast rack trailer 402 was saved and moved to the Frans Halsstraat museum building in The Hague.
402 started life as HTM horse tram series 200-215 (Franco Belge, 1896) and was converted to a trailer for the electric services in 1905.
It was disposed of in 1947, but luckily started a new life as a garden shed. Its final owners have now moved to a pensioners residence, making the tram available to the The Hague museum. Since former HTM horse trams are very rare (there exists only one other in Brussels), this is very good news.
It will be restored as electric trailer 402, to form a typical summer tram to Scheveningen with motorcar 265 and toast rack trailer 505. Otherwise it can be used behind HTM 2 (ex Amsterdam 72) on route 4 which at that time was running through the premises of the Houses of Parliament.

All the best for 2011,
Wim Beukenkamp