Special correspondent Frank Bagshaw has sent me this picture of Metro 07 at The Royal in Wolverhampton. 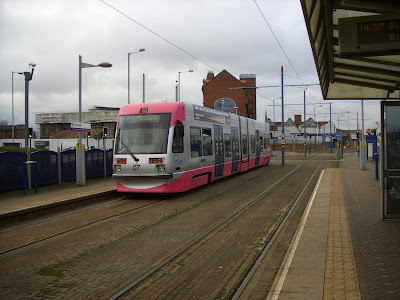 Our Midlands correspondent has sent a literary contribution in the form of a poem.
NTM AND THE ANNIVERSARIES ...

1985: Seven little vintage trams going to the sea –
All got there and operated, so successfully!


1998: Three little vintage trams going to the sea –
All got there and operated, so successfully!


One withdrawn for overhaul found something needing a fix – then there were six ...
... despite the seemingly-obvious substitute to recreate 1948 that nobody ever seems to have mentioned or even thought of?


One set off completely unprotected, met a tree – then there were four


"Two out of three ain't bad" sang Meat Loaf in the seventies: but what to make of three out of seven ... That actually got there? – Of which two had been before, one twice


One – newly overhauled but not fully run in? – went demic – Leaving just one ...


(From our Midlands correspondent)
Posted by Richard Lomas at 07:14