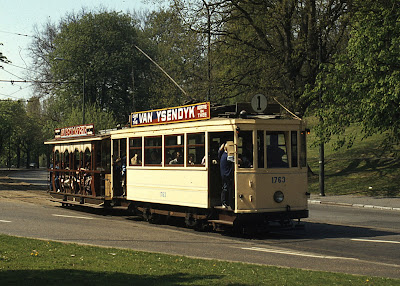 Graham Feakins has sent me this contribution:
You might care to post this You Tube link of 15 minutes on your blog to give an idea how they celebrated 125 years in Brussels on 19th September, 2010:
http://www.youtube.com/watch?v=jseYHk50Ebw
Out on the tracks were:
Bruxelles Exposition bogie car 5016
Amsterdam three-axle car 533
München maximum-traction bogie car 490
Nantes two-axle car 144
Bruxelles PCC 7093
Milano Peter Witt car 1503 in 1928 condition
Paris centre-entrance bogie car 505
Rotterdam centre-entrance Werkspoor motor car 515 with trailer
Den Haag PCC car 1024
Liège-Seraing RELSE type D bogie car 321
Wien car 4098
The whole of Route 44 was run with these cars between 09.00 and 19.00, and other historic cars, making 26 in all, performing a 4-minute service.
Notes taken from Mike Russell's in December's "Tramways & Urban Transit".

Here is another You Tube link, which in some respects is better than the first one I sent you:
http://www.youtube.com/watch?v=96FGjDqwFeA

I thought two You Tube links would be sufficient but I have just discovered this:
http://www.youtube.com/watch?v=wenmzqt2-G8
It is 10 minutes of atmospheric stills, taken on the anniversary day, showing dozens of views, not only of the trams but the 'period' buses as well, all accompanied by traditional songs of another era.
It progresses to today's scene with the latest trams and buses.

Thanks very much Graham.