A letter from the Chairman 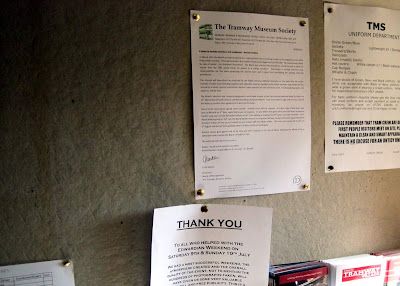 'A letter to Society members and employees - Journal matters' signed by the Chairman of The Tramway Museum Society has appeared on the traffic office noticeboard. It explains why I was dismissed as Assistant Journal Editor. Presumably he had to go to this trouble because the Hon Sec forgot to include this news in the last issue of Contact.
A simple statement would have sufficed. For example "The Assistant Journal Editor has been dismissed for failing to comply with instructions from on high. The Board hopes he will enjoy more time with his family."
Finally it would have been a courtesy to have been sent a copy of the letter, which mentions my name 5 times, rather than waiting for me to find it.

I will reply to Wim's and Hugh's comments in detail tomorrow. I did tell the Editor that I could not sign the document as written. I would have been (and still am) willing to explain my reservations to any member of the Board. If we could not then have reached agreement at least I could have been afforded a dignified farewell.
Posted by Richard Lomas at 07:24