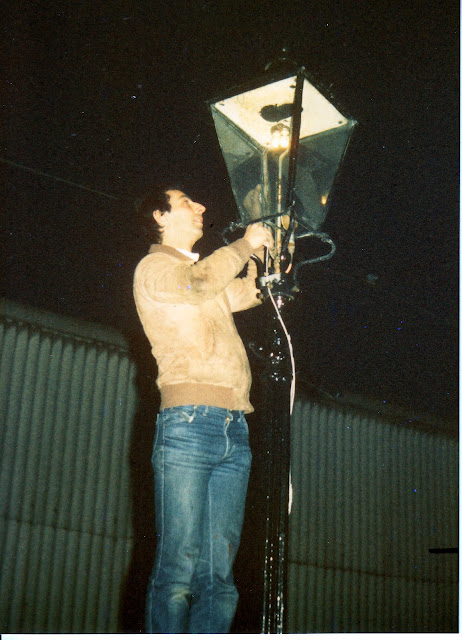 Graham Feakins has send me these two pictures of himself working on the gas lights at Crich in 1976.
"It was when Rex Moorey was still alive and I used to help him with some maintenance work.  As is clear to see, it was often best to do this sort of thing after dark when you could see what was working and what needed replacing or adjusting/cleaning."  "Now that I have gone through my Journals for further information, I am simply amazed at the almost complete lack of reference to the gas lights in the street scene of the Journal over the years (my collection as a member is 1969 to date).  If it had not been for Rex, then I doubt if any of them would have witnessed a cubic foot of gas through them in the first place!  Basically, there was a mention in Dec. 1970 to erecting some standards on the car park side but with no immediate plans to having them lit, followed by a report in October 1984 that all were to be converted to electricity, accompanied as I know by much neglect in between if Rex could not make it, resulting in many gas lamps malfunctioning, although I tried to help.  Probably nothing was done after he died.  There’s not even a single photo in the Journal showing a complete gas lamp standard working throughout the issues and the two views of me attending them may be the only ones!"